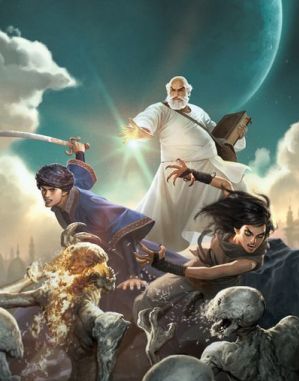 A fantasy series by Saladin Ahmed that takes place in an Islamic-inspired fantasyland, the Crescent Moon Kingdoms, rather than the typical Medieval European Fantasy. Dr. Adoulla Makhslood is a ghul-hunter in the city of Dhamsawaat, accompanied by his trusty sword-wielding assistant, Raseed bas Raseed.
Advertisement:

While still retaining spirit of High Fantasy, although it seems a lot more comfortable as sword & sorcery (Heroic Fantasy) this series plays with character and setting tropes for a unique look on a traditional quest.

The first book, Throne of the Crescent Moon was released in 2012, and the follow-up The Thousand and One and at least one other sequel is forthcoming.