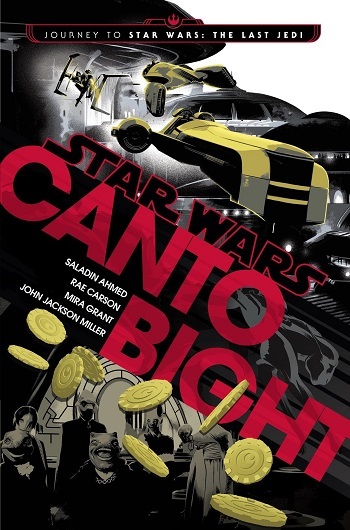 War is returning to the galaxy. As the First Order prepares to unleash their power on an unsuspecting New Republic, the only true opposition is the Resistance. Safe places are growing scarce, except on Cantonica.
Emerging from the endless sands is Canto Bight, a city of excess and indulgence. In this luxurious escape for the wealthy and unscrupulous, dreams are made reality and the prospect of war brings only the opportunity for profit.
Even as the darkness grows, visitors chase their fortunes enthralled by the glamour and thrill of the casino city. The fate of the galaxy matters little amid the glittering brilliance of Canto Bight. For whatever happens, Canto Bight prospers....
Advertisement:

Canto Bight is a Star Wars Expanded Universe anthology of four novellas that focuses on different inhabitants of the casino city Canto Bight. It was released on December 5, 2017, as part of the Journey to Star Wars: The Last Jedi. Each story features a small measure of crossover or references to the events of another tale in the anthology.

"Rules of the Game" by Saladin Ahmed follows vaporator salesman Kedpin Shoklop's first night in Canto Bight after he wins a trip there for being salesperson of the year. The naïve Shoklop quickly finds himself at the mercy of Canto Bight's callous and duplicitous culture, but the interest of Syndicate member Anglang Lehet may prove to be his salvation or death.

"The Wine in Dreams" by Mira Grant sees the arrival of renowned wine trader Derla Pidys to Canto Bight as she seeks to acquire a legendary wine from the equally legendary Grammus sisters in the nightclub of Ubialla Gheal, who has her own plans for the wine.

"Hear Nothing, See Nothing, Say Nothing" by Rae Carson focuses on masseuse Lexo Sooger as he races against the clock to rescue his adopted daughter from the clutches of gangster Big Sturg Ganna.

"The Ride" by John Jackson Miller sees card player Kaljach Sonmi encounter the Lucky Three, whose strange relationship with probability sends Kaljach's life into a spiral and towards certain doom unless he can find a way to harness their winning and losing ways to his advantage.