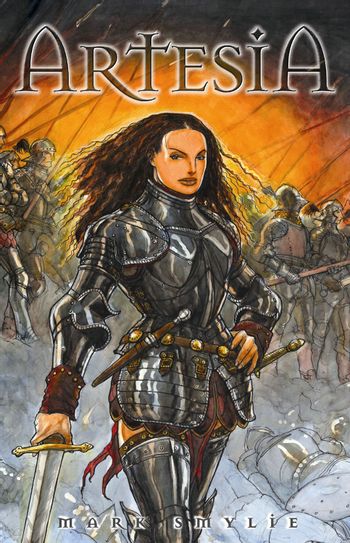 The main character is the eponymous Artesia of Dara Dess, a warrior-queen, witch, spirit-walker and former concubine. The series details her campaigns in support of the larger Middle Kingdoms against the opposing Thessid-Golan Empire, a war long in coming due to a religious schism between the Kingdoms and the Empire.
Advertisement:

The original 6 issue mini-series lasted from January to June, 1999. The art is fully painted - no computer coloring here.

Has spawned a Tabletop RPG called Artesia: Adventures in the Known World. It runs on the Fuzion system, and is highly complex and detailed, making for a very rich and involved gaming experience.

In 2014, Mark Smylie came out with the full-length novel The Barrow which is set in the world of Artesia and has since been followed up in 2019 with Black Heart.