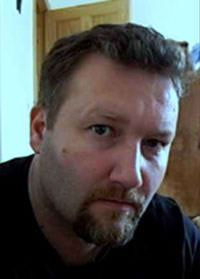 "Memories are important, like the bones of the mind. We build ourselves upon them, flesh and blood moulded around the pictures of what is past."
Advertisement:

A fantasy-author from Northern Ireland who was born in 1967.He is best known for his "The Monarchies of God" series, which is his greatest success, prompting Steven Erikson to say in an interview

that it was the best series he has read in years.

A thing worth noting is his time at the military (nine years) and his great interest in history. Both of it is flamboyant when reading about the strategies employed by the characters of his books. They are very sensitive and show that the author knows the wielded weapons and their best use in battle. Hollywood Tactics are a very good way to get yourself killed in his works, as some characters have to find out. Through a lot of books his interest in historic seafaring is also eminent.

The Monarchies of God