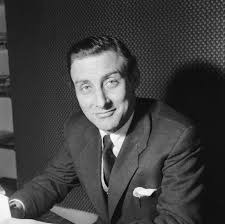 "I'm not afraid of dying. I just don't want to be there when it happens."
Advertisement:

Terence Alan "Spike" Milligan, KBE (16 April 1918 – 22 February 2002), often described as "The Godfather of British Comedy", was an Indian-born comic writer and poet who lived most of his life in either Britain or Australia, but identified as Irish. He was conscripted into the British Army during World War II and served with the Royal Artillery in North Africa and Italy, eventually recording his experiences as seven volumes of war diaries generally known by the title of the first volume, Adolf Hitler: My Part in His Downfall.

Although During the War his main fame was as a jazz musician, after returning to Britain he broke into radio as a writer and broadcaster. Together with Peter Sellers, Harry Secombe and the almost forgotten Michael Bentine, he created one of the most influential British comedies of all time, The Goon Show.

His television work is less well known, though he also created the Q series, a dueling show with Monty Python's Flying Circus (ironically, the Pythons were inspired by Milligan's own writing on The Goons). A few years later he contributed to The Two Ronnies as a writer (and occasionally appearing in the sketches as a cameo). He also wrote several comic novels and plays. Besides The Goons, he is best known for his poetry, which generally took the form of Absurdity Ascendant nonsense verse.

Milligan suffered from bipolar disorder, as well as being driven to manic depression by some of his traumatic experiences During the War. He was voted 'Funniest Person of the Millennium' by BBC viewers in 1999. He died in 2002, having wanted the inscription "I told you I was ill" on his gravestone; it was allowed ... but only in Irish Gaelic.

As a tangential note, Roald Dahl reportedly envisioned Milligan for the role of Willy Wonka, and was disappointed when this didn't come about for the movie.

Works by Spike Milligan with their own trope pages: