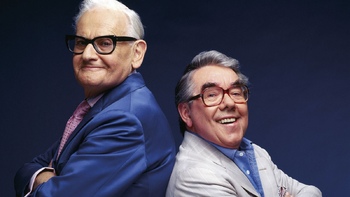 A pair of British comedians (by their own insistence not a double act), whose work involved both solo and pair sketches, often feeling like a comedy troupe that just so happened to only have two people in it. Their show on the BBC (The Two Ronnies), while most famous for their sketches, was a variety show that also featured music, dancing and the occasional other comedian, running from 1971 to 1987.

Most of the humour was based on wordplay, with sketches built around Spoonerisms, puns, homophones, mondegreens and similar. The show had many writers: in a fairly famous background story, one of the more celebrated writers was the mysterious Gerald Wiley, who was eventually revealed to the production team to be Ronnie Barker himself submitting material under an assumed name to avoid it getting preferential treatment (he once even rejected one of his own scripts).

Once per Episode, each of the Ronnies would get a solo showcase. Ronnie B., who was never comfortable performing as himself, would portray an unusual character, often as a "mad spokesman", or played people making an appeal for the most ridiculous causes. Ronnie C., who was more naturally garrulous, would always give one of his famous "chair monologues", which consisted of him telling a long rambling story to the audience from an armchair, always taking jabs at the producer and/or his wife. Often these were based around a joke which, if told straight, would not be very funny — the hilarity came from the roundabout and tangential way he got to the punchline.

The most famous Two Ronnies sketches have to be:

Most series included a serial, in full costume and with drama-series quality props (not that that was very high quality on the BBC in those days). The most (in)famous was The Phantom Raspberry Blower of Old London Town, written by Spike Milligan ("and a Gentleman"). A close second would be The Worm That Turned, featuring a women-ruled England. Also popular were the stories of the down-and-out sleuths Piggy Malone and Charley Farley, a mix between Sherlock Holmes and the typical cop shows of the 70s.

Barker retired in 1987, but made on-and-off appearances with his short buddy. They also reunited in 2005 to do The Two Ronnies Sketchbook, a compilation of their best-known skits. Unfortunately, Barker died in October of that year at 76 (the Christmas edition was taped a few months before, being a literal example of Christmas in July), while Corbett continued to work in television and radio before passing away in 2016 at the age of 85. Naturally, four candles instead of two were displayed at their respective memorial services.

The Worm That Turned