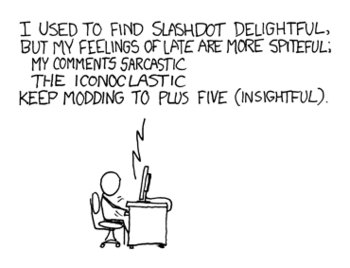 A Limerick composed with wit
Follows strict, concise logic in it
To give you a sense
And then send you hence,
The last word of this one is "shit".
—Kevin Klawitter
Advertisement:

While TV Tropes loves its haiku,
Don't limericks need their time too?
In works of all kinds
They grace our learned minds
So don't be so quick to pooh-pooh!

A limerick, so it must seem,
Is a poem that follows a scheme.
The rhyme does not sway
A-A-B-B, then A
With line lengths that match. Peachy-cream!

...And that ends the Self-Demonstrating Article portion of this trope's description. If it goes any further, it's quite sure it'll drive us insane.

A limerick is a poem of five lines that follows an A-A-B-B-A rhyme scheme as demonstrated above. The "A" lines usually have eight syllables, and the "B" lines five. It's a very recognizable pattern. (If we want to be technical, the pattern is an anapestic trimeter in the A lines, dimeter in the B lines. The anapest

has two unstressed syllables followed by one stressed syllable, giving the poem a bouncing sing-song feel.) The rhyming lines also often feature a double or triple rhyme, meaning multiple syllables rhyme rather than just the last one. It's common (though not mandatory) for the first line to end with the name of a geographic location such as a city or village (as in the classic "There once was a man from Nantucket").

Compare Haiku, Purple Prose, and another short comic genre, the Feghoot. Limericks are often risqué and may qualify as a Bawdy Song. Also, playful poets will frequently subvert the form by messing with the last line; sometimes this is adding extra syllables, sometimes it's Subverted Rhyme Every Occasion.