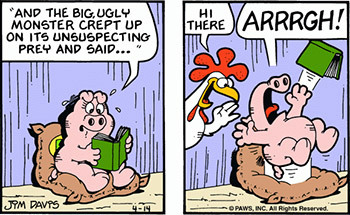 "They think you might be a cook. But you know what I think, Linguini? I think you are a sneaky, overreaching, little... (gasps as he spots Remy) RAT!!!"
— Skinner, Ratatouille
Advertisement:

A humorous device used when a character is talking to another, but suddenly sees something which causes him or her to have a sudden and loud change of subject. However, astonishingly, what the distracted character actually shouts could well be what they had been about to say, due to double meanings of words or just plain old coincidence.

A variant of this is when the conversation after the change of subject is not what the speaker had been about to say, or the interrupter is another person, but the two parts still make perfect sense as a sentence when pieced together.

Compare Two Scenes, One Dialogue and Twisted Echo Cut. See also Last-Second Word Swap, where this is (usually) deliberately invoked by the speaker to avoid saying something for whatever reason.

You can't just bend the rules!

Happens to Flug while lecturing Demencia.

You can't just bend the rules!

Happens to Flug while lecturing Demencia.