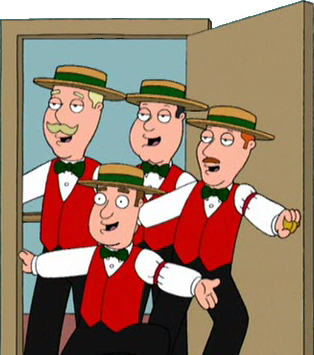 A Barbershop Quartet is a four-person (traditionally all-male) band which sing A Cappella in four part harmony. Like most music they can and often get used for something other than their musical merits. Oftentimes, Barbershop quartets are used for comedic effect or as a way to deliver insults that may be too crude or outrageous to be said normally but somehow becomes much more acceptable when sung by a Barbershop Quartet.

Compare to Gratuitous Mariachi Band, another musical group that is often used for comedy.