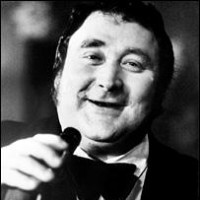 Never knowingly inoffensive, and loved by millions
"I've got cheekier with age. You can get away with murder when you're 71 years old. People just think I'm a silly old fool."
Advertisement:

Bernard John Manning (13 August 1930 – 18 June 2007) was a British stand-up comic, nightclub impresario and TV performer who was most active in The '70s. Until tastes and attitudes changed in The '80s, he was hardly ever off TV, usually on stand-up comedy and variety shows produced by ITV's northern region, Granada TV. Bernard was never troubled by issues of political correctness or good taste, and this brought about the diminishing of his TV work in The '80s and his complete dissappearance from the small screen in The '90s. While he could still pack out venues, and fans travelled from all over the country to see him at his own Embassy Club in Manchester, if he was mentioned at all on televison in his later years, it was as a dinosaur from a previous age, and as an awful warning as to how racist, sexist and everything-ist old-school British comedy actually was. Manning never married, remaining devoted to his old mum and still living in the same house with her that they'd occupied all their lives.

Three tropes went into a pub.