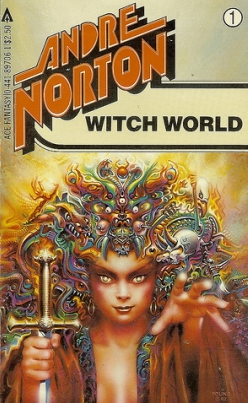 In the first volume, written in 1963, Simon Tregarth travels from America to Estcarp, on the Witch World, using the Siege Perilous, which sends people to the world that best fits them. There he discovers magic powers, and plays a leading role in a war against high-tech invaders from a third world.

After one sequel, the focus moved to Simon's children, who crossed the eastern mountains to the land from where the Mage Species had come, and many old powers slept for good or ill.

Norton also wrote books set on the continent across the sea, with little overt connection with the early volumes beyond the setting. Many of the later books were written in collaboration with fans of the original.