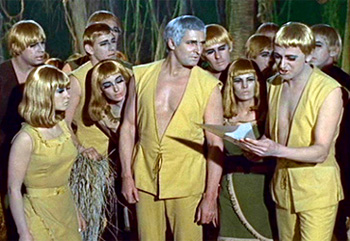 There is such a thing as physical dislike. Europeans know this about other Europeans.
—Orson Welles
Advertisement:

In fiction hair colors are often used to easily identify a character. They're usually meant to identify personality traits, such as the Fiery Redhead or Brainy Brunette. However, hair colors being used to distinguish a character's ethnic background are not uncommon.

As in many historical eras, many fantasy writers divide their humans up into finer ethnic categories than are common nowadays. One of the most common is 'races' that would in the USA, South Africa, and other places all be called 'white' (after their pale-ish skin and the legal names for prior ranks of citizenship) but, in the work, are categorized by their hair color, of which blond and dark are the most common. These hair colors are often depicted as remarkably uniform throughout the different populations.

There is a certain amount of Truth in Television here. Before widespread genetic diversity, with people meeting and mixing between different countries or continents, the traits of a single tribe or village or other group of people were often common across the entire population. One group of people, who haven't been mixing with outsiders, will generally share the same general appearance. It's part of why, for instance, there are two main stereotypical depictions of Irish people, the 'black' Irish, like Colin Farrell, and the 'red' Irish, like Colm Meaney (Miles O'Brien from Star Trek). Of course, with black hair and brown eyes being dominant genetic traits a focus on these (admittedly very visible) characteristics isn't very helpful for differentiating between ethnic groups outside of Europe and the Middle East.

In all too many works, however, the races are absolutely uniform, living in an ethnic Patchwork Map. Even at the borders, mixed-race characters are unusual and physically distinctive. Phenotype Stereotype usually prevails: blue eyes for blonds, green eyes for redheads, gray eyes or brown eyes for dark-haired people. Furthermore, the physical appearances are also used as a short hand for Planet of Hats traits. Sometimes two characters sharing a hair color may be a Hair Color Spoiler, especially if their connection is supposed to be revealed later.

The prevalence of Medieval European Fantasy makes the subdivisions of European ethnic groups somewhat plausible, but other ethnic subdivisions are known, and, sometimes, a blond race will contrast with a dark-haired race with darker skin. Often, the mere presence of whites and blacks in the same area will not preclude their regarding themselves as more finely divided than that — which is also Truth in Television.

And, of course, racism follows the racial divides the cultures use. Compare Fantastic Racism.