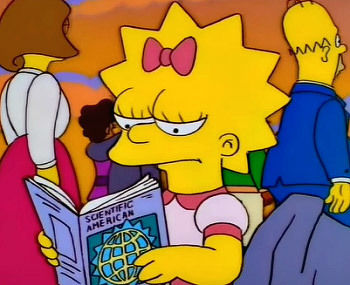 And it's her idiot father who works at a nuclear power plant. Go figure.
"I'm very important. I have many leather-bound books, and my apartment smells of rich mahogany."
— Ron Burgundy, from Anchorman: The Legend of Ron Burgundy, trying to invoke this trope, with mixed results.
Advertisement:

One common way to show that a character is exceptionally smart is to portray them reading classical literature or something heavily technical and science-y. Additionally, characters are always reading the heavy bound versions of the book so we can easily see what, exactly, it is that they're reading — otherwise, why even bother putting the book there in the first place?

Expect the titles referenced to be from Small Reference Pools, since again, it's only possible to impress upon the viewer how smart the character is provided they're reading something anyone has ever actually heard of.

Of course, it's not like all such writing is completely beyond the understanding of us mere mortals, and this trope can be well done provided that the character is, in fact, reading a specific book — and not just a classic that we can all identify as such. It can be quite informative when the book's subject matter becomes something of a plot point. Rather than simply observing the character reading the book, for example, we can watch another character ask what it is they're reading — and why.

For bonus points, an Omniglot can read it in the original language. The more obscure the original, the more points. Sanskrit is ideal.

Related to TV Genius, specifically, the tendency of average-to-dumb characters to spout off a whole bunch of knowledge they never actually learned if they suddenly become one.

A case of Truth in Television — some people do, in fact, read books like this for the sole purpose of trying to appear intelligent.