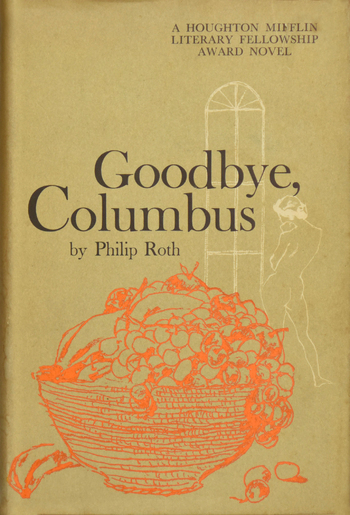 Goodbye, Columbus is the first book by Philip Roth, published in 1959. It is a collection of the eponymous novella and five short stories.

open/close all folders
Goodbye, Columbus
In Goodbye, Columbus, Neil Klugman from Newark falls in love with Brenda Patimkin from Short Hills. As they come from different socioeconomic backgrounds, the novella focuses a great deal on this aspect of their relationship, and the disparity between the worlds they come from becomes more and more marked as the story progresses, leading to their eventual break-up. A subplot involves a black boy repeatedly visiting the library where Neil works and reading a tome of Gauguin reproductions, something which upsets the latter's supervisors.

The novella was adapted into a 1969 film directed by Larry Peerce, starring Richard Benjamin and Ali MacGraw.

The Conversion of the Jews
In The Conversion of the Jews, Oscar Freedman, 13, going through a phase of religious skepticism, is shown in conflict with the rabbi of his local Hebrew school, Rabbi Binder. After Binder slaps him during a heated argument, he climbs on the roof in a confused attempt to escape, and, after the locals mistakenly believe that he has been threatening to jump, forces them all, and especially his mother, the rabbi and the janitor, Yakov Blotnik, to accept Virgin Mary's Immaculate Conception.

The Conversion of the Jews provides examples of:

Defender of the Faith
In Defender of the Faith, Nathan Marx, a sergeant at Camp Crowder, meets private Sheldon Grossbart, who, along with two of his friends, Halpern and Fishbein, attempt to avoid their scheduled duties (such as G.I. parties), citing religious obligations. After Grossbart discovers that Marx is also a Jew, he repeatedly tries to induce guilt in him by appealing to their common ethnic identity in order to gain his sympathy and be granted passes. At some point, Marx becomes weary of his manipulation, and sends him over to the Pacific (which Grossbart had initially managed to avoid by pulling some strings).
Advertisement:
Epstein
In Epstein, Lou Epstein, owner of a paper bag company, goes through a mid-life crises, and starts an affair with another woman. After developing a rash, he contemplates the possibility that he might have contracted syphillis, and his relationship with his wife begins to disintegrate. He later suffers from a heart attack in his mistress', Ida Kaufmann, house, and is taken to the hospital, with a doctor declaring the rash to be an "irritation".
You Can't Tell a Man by the Song That He Sings
The unnamed narrator reminisces about his befriending two ex-convicts and juvenile delinquents in high school, and the pranks they pulled on Mr. Russo, their Occupations teacher. It is later revealed that Mr. Russo was a Communist, and the narrator likens his being indexed by the Senate Committee to his own being foldered for breaking a window (and does not blame his friends', Alberto Pelagutti and Duke Scarpa, running away).
Eli the Fanatic
In Eli the Fanatic, Eli Peck, a lawyer, is asked to force a newly formed Yeshivah to leave the progressive community of Woodenton, where Gentiles and Jews have peacefully coexisted since the end of WWII. However, the Headmaster, Leo Tzuref, refuses to do so, and the conversations he and Eli have cause the latter to question his rejection of his own identity.