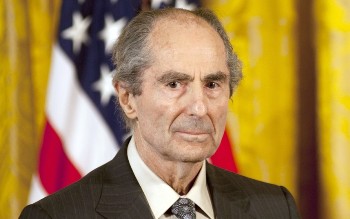 "Writing is frustration - it's daily frustration, not to mention humiliation. It's just like baseball: you fail two-thirds of the time."
Advertisement:

Philip Milton Roth (March 19, 1933 – May 22, 2018) was the Pulitzer Prize-winning author of such acclaimed novels as Portnoy's Complaint, The Human Stain, American Pastoral, The Plot Against America and the novella Goodbye, Columbus.

His works largely revolve around several recurring themes - family, sex, America, the Jewish experience, and above all Philip Roth. Everything he writes invariably features some kind of Author Avatar, be it a standalone character (most famously Alexander Portnoy), his recurring character Nathan Zuckerman, or even Roth himself (in which case the degree of autobiographical honesty ranges from "lots" to "almost none" to "not telling"). He always portrays "himself" as a cynical, neurotic intellectual, tinged with misogyny and self-loathing; generally the older the character is, the more pronounced his flaws.

Roth is known for his distinctive writing style, which is at once analytical, empassioned, confessional, foul-mouthed and extremely verbose. Several of his works have been adapted into films, but rarely with results considered satisfactory by critics.