Literature / The Plot Against America 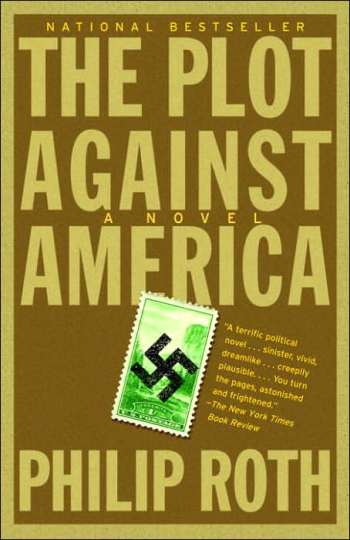 An Alternate History novel written by Philip Roth and published in 2004. There's a live-action adaptation Mini Series, produced by HBO and written by David Simon and Ed Burns, the creators of The Wire, which aired in March 2020.

As almost every American high school student knows, Franklin D. Roosevelt was first elected as President of the United States in 1932 and enacted a New Deal that helped to end the Great Depression. He was elected to his third term in 1940, riding on his popularity as well as a promise to the American people that he would not get the United States involved in the Second World War raging in Europe, defeating Wendell Willkie. America did not get involved in World War II until the Japanese bombed Pearl Harbor in Hawai'i.

However, The Plot Against America diverges from actual history starting with the Republican National Convention that met concerning the 1940 election, where Charles Lindbergh instead of Wendell Willkie is named as the Republican nominee for President. Jewish people across America spontaneously and loudly protest this as soon as they hear the news. Why? Lindbergh is a Nazi sympathizer and a proud recipient of the Order of the German Eagle who even refused to return it after Kristallnacht, saying that it would constitute an "unnecessary insult" to the Third Reich. However, Lindbergh is able to use his popularity as a famous aviator as well as his isolationism to defeat FDR in the 1940 election. Thereafter, he signs "understandings" with both the Third Reich and Japan, making nice with both governments. Thus, the bombing of Pearl Harbor as well as America's 1942 entrance into World War II are averted. Antisemitism increases in popularity as an alliance between the American and Nazi government strengthens.

Meanwhile, Philip Roth is a preteen Jewish boy who must cope with the ever-growing antisemitism in America. His mother has started saving money in a Canadian bank in case things get so desperate that the Roths must leave the country. Phil's Aunt Evelyn grows closer to the Republican politicians and the visiting Nazi dignitaries. Phil's brother Sandy is turned against the Jewish culture and his cousin Alvin comes back home wounded after fighting in World War II for the Canadian army. It gets worse.