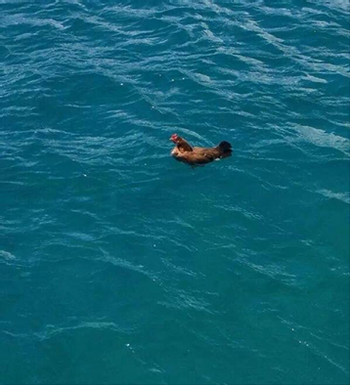 Why did the chicken cross the Pacific Ocean?Answer To get to the other tide.
"Why did you cross the road?"
— Bobby Santiago to a chicken, The Loud House, "Undie Pressure"
Advertisement:

One of the oldest Stock Jokes ever told, this joke involves the classic setup: "Why did the chicken cross the road?" Most often, this leads to the classic punchline: "To get to the other side", though the punchline may vary sometimes. There are also times where an actual chicken may be involved.

Where the joke originally came from is not entirely certain. Most folklorists believe it was originally an example of Anti-Humor, with the setup leading the listener to expect a traditional punchline but the answer being a mundane factual explanation. Robin Bernstein, in his 2011 book Racial Innocence: Performing American Childhood from Slavery to Civil Rights, further pinpointed its origin to Minstrel Shows, where it and other anti-jokes (e.g. "Why does a fireman wear red suspenders?" "To keep his pants up!") were used as part of the overarching theme surrounding black people trying and failing to assimilate into white society. Either way, it makes a very bad example of a joke to use as an introduction to humor (as it is often used in media), since it requires the listener to already be familiar with the concept of a joke in order to understand the "punchline" at all.

There are others who think the joke is actually a suicide joke with "The Other Side" referring to the afterlife.

Either way, of course, these days everyone and their grandmother has heard it a million times ever since they were far too young to grasp the concept of humor, rendering the joke itself a case of "Seinfeld" Is Unfunny.

From "Patsy Sells Saffy to Nova Prospekt". A stream of consciousness leads to some bizarre punchlines.

From "Patsy Sells Saffy to Nova Prospekt". A stream of consciousness leads to some bizarre punchlines.