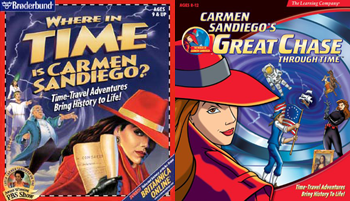 We're on the case and we're chasing her through history!
note Original Where in Time release cover on the left, Great Chase Through Time cover on the right
1997's Where in Time is Carmen Sandiego?, later re-released by The Learning Company under the name of Carmen Sandiego's Great Chase Through Time, is a point-and-click Edutainment Adventure Game in the Carmen Sandiego series. Done in a style similar to Monkey Island, it was a unique Genre Shift from the typical strategy-based games, including the original 1989 version of this game.
Advertisement:

This time, Carmen Sandiego has snatched a time device called the Chronoskimmer and has used it to send her fellow crooks back in time to prevent major historical events from ever happening. You, starting at the rank of Time Pilot, are called by the Chief (once again played by Lynne Thigpen) to travel through the time tunnels that lead to periods visited by the Chronoskimmer. You are accompanied by one of five "Good Guides": Ann Tickwitee, Rock Solid, Ivan Idea, Polly Tix, and Renee Santz, but cannot communicate with the Chief once you are in the time period. Once you set things right, you have to find where the thief is hiding, which can be done by finding the fragments of notes Carmen left for them.

There are nineteen cases in all. They and the tropes specific to them are listed here.

The time tunnels are now taking you to April 2004, where a certain wiki should have started covering tropes in television by now, but there aren't any tropes named yet. Go find out why, Time Pilot, and... don't lose track of time looking at the site.

Rock Solid points out that real Viking helmets didn't have horns, and a nearby Viking agrees.

Rock Solid points out that real Viking helmets didn't have horns, and a nearby Viking agrees.