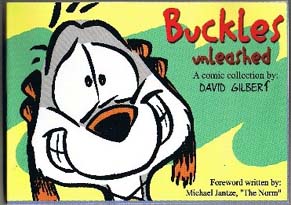 is a comic strip by David Gilbert that debuted in newspapers in 1996. It follows the misadventures of a naive dog named Buckles, who lives with a pair of caring yet overprotective human owners (or, to a lesser extent, "parents") named Paul and Jill. Every single time, Buckles would have Paul teach him dog tricks, or would love to steal a valuable article of clothing and chew on it, which will always result in a punishment. When his owners aren't around, Buckles usually creates plans with an unseen flea that lives in his right ear, or talks to other animals outside, including a bird friend named Arden.

While the comic isn't quite popular with readers, it has been praised by its syndicate, who said: "More of an only child with canine instincts than he is the family pet. Buckles can display all the charm...of a small child discovering how to find his way through life." You can do us a favor and read the comics here