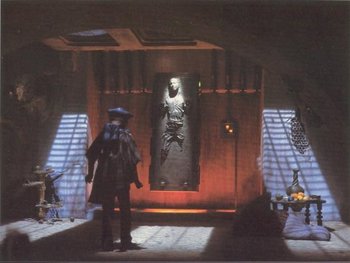 When in a battle to the death, the winner has ultimate authority over the loser's fate.

To keep a person as though they were property can mean a great many things in fiction. Maybe they are hung up in cages like canaries, kept in a glass case with a label or dressed up in a bikini to dance provocatively. If the winner knows magic, then their trophy-hood could take on a more literal tone, being turned into a statue of yourself and kept in a hall among other unfortunate hunks of gold and marble. Either way, slavery like this is not maintained out of a need for hands in the fields or for monetary worth, but rather as physical proof that they have defeated you, stringing the loser up and making them look pretty like a shiny medal or blue ribbon.

If this enslavement is mystical in origin, then the only means of liberating oneself of such a deal without serious cosmic repercussions is when the master is dead or finally defeated.

Even worse is when the loser gets a light of the whole situation but can't do a thing about it as they are trapped as a still-conscious trophy.

Compare with Battle Trophy, Creepy Souvenir, and Dead Guy on Display, which requires the trophy to be dead. See also Deal with the Devil, Human Pet, Living Doll Collector, Living Museum Exhibit, and People Zoo. Not to be confused with Lost Him in a Card Game, Trophy Child, or Trophy Wife. Can result in Why Don't You Just Shoot Him?