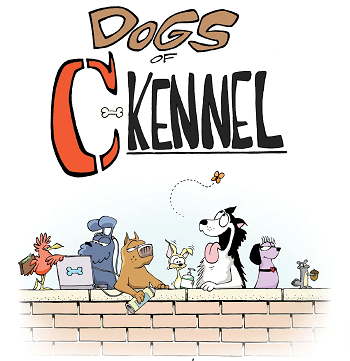 Dogs of C-Kennel is a comic strip created by Mick Mastroianni and drawn by the B.C. artist Mason Mastroianni. The strip started in October 2007 as a webcomic, and was relaunched as a full fledged newspaper strip in October 2010.

The comic chronicles the adventures of a group of dogs that live in a kennel known as C-Kennel. The characters include Will, a streetwise pit bull and the de facto leader of the group; Tucker, a technologically-inclined schnauzer who frequently makes use of electronic devices, such as his iPhone and computer; Kenny, a half-witted yet lovable husky; Iggy, a chronically nervous chihuahua; Cocoa, a beagle and Kenny's unrequited love interest; Wheeler, a bird who is friends with the kennel dogs; and Oliver the Great, a stiff-upper-lipped Great Dane.

Most of the strip's humor is derived from the dogs' life at C-Kennel, such as Will's attempts to escape by digging tunnels or via other means, Tucker's interacting with online-based issues, Wheeler's hitting on females, Kenny's unrequited affection for Cocoa, Iggy's nervous reactions to his environment, the dogs watching TV as a group, and similar things. The comic also makes significant use of Shout Outs and Cameos to lighthearted effect.