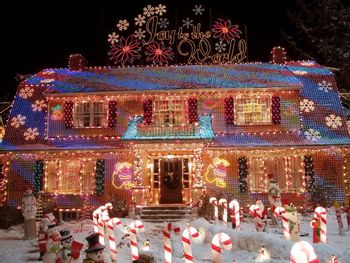 Just imagine having to untangle all those cords.
How to show that people feel really festive and are in the mood for some serious Christmas celebrating? Why, decorate their houses, of course, and apparently, more is better when it comes to decorating a household for Christmas in fictionland.
Advertisement:

Characters light up their house from the bottom to the roof, the yard/garden included; decorate and/or illuminate their door and windows; have the biggest, finest tree; fill all their rooms with Christmas wreaths, candles, garlands, tinsel, wrapped-up gifts, stockings, cards, bells, Nativity scenes, Santa Clauses, reindeer figures, angels, snowmen, snowflakes, holly, mistletoe, poinsettias, candy canes, peppermints, cookies, gingerbread, gingerbread houses, gingerbread men, and more. Everything is very bright and very big. One popular colour combination is red and green, often with silver or gold, and there are lots of lights everywhere. Absurdly Bright Light and Christmas Light Chaos might be employed for extra comedy.

Often, there is a contest for the best decorated house, and it's a matter of honour to try one's best to win. In some cases, this might be related to Conspicuous Consumption and showing off. It might be pointed out that more is not always better and that this kind of decorating can be tacky.

This is a staple of most Christmas episodes, Christmas specials and Christmas movies. It's very often Played for Laughs on sitcoms and in Western Animation. In workplace comedies, it's not uncommon for characters to take a similar approach to adorning their office or cubicle come the holidays.

These extravagant and overblown decorations have been seen in Real Life, too, but usually people don't exaggerate that much and try to keep the budget down. (Usually.)