You may be looking for Zippy!, by Bill Griffith. 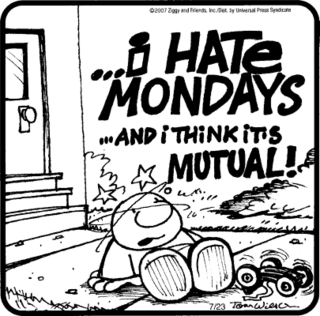 Smithers: [reading Ziggy strip] So Ziggy goes to the repair shop ... there's a sign on the doorbell reading 'Out of Order'!
Mr. Burns: Ah, Ziggy, will you ever win?
— The Simpsons
Advertisement:

Ziggy is a comic strip originally drawn by Tom Wilson. It is a one-panel strip on dailies, and a sequential on Sundays. The strip is a Long Runner, having run in newspapers since 1971. The strip focuses on the eponymous character, a human of some sort who lives at home by himself with his cat, dog, parrot and fish.