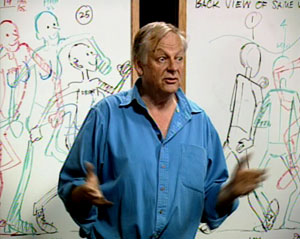 "It's a craft, isn't it? A proper craft. And craft can be an art."
— Richard Williams about animation
Advertisement:

Richard Edmund Williams (March 19, 1933 — August 16, 2019) was a prominent Canadian-British artist and animator born in Toronto and one of the most respected who ever lived, famous for his exhaustive, silky smooth, seamless animation and vast knowledge of classical animation techniques he had learned from its innovators and later shared with others interested in learning the medium.

Williams got his start as a commercial illustrator in his teens and later made a couple of independent short films, including The Little Island and Love Me, Love Me, Love Me. He later had the pleasure of meeting and training under veterans from The Golden Age of Animation such as Disney's Nine Old Men, as well as Warner Bros. animator Ken Harris and industry drifter Grim Natwick. Already a skilled draftsman, Williams' animation skills flourished under their guidance. Harris and Natwick would later migrate to his London-based studio.

In the early 1960s, Williams worked at George Dunning's animation studio T.V. Cartoons Ltd. in England, animating television commercials. Shortly thereafter, he started his own studio, Richard Williams Studios, which produced several acclaimed commercials, artistic titles and animated credits openings, including What's New Pussycat? and The Return of the Pink Panther, the latter of which is considered the best of its series.

In 1971, Williams directed an acclaimed, Chuck Jones-produced Animated Adaptation of A Christmas Carol, earning him his first Academy Award. A few years later was his feature directorial debut with Raggedy Ann & Andy: A Musical Adventure, a truly bonkers movie created by a staff consisting both of many of Williams' mentors, including Looney Tunes animator Art Babbit, and future name-animators such as Eric Goldberg and Tom Sito.

Williams had his biggest mainstream success in 1988 as the animation director of Who Framed Roger Rabbit, bringing to life amid live actors over ninety beloved cartoon characters from classic Warner Bros., Disney and MGM shorts and earning him both the Visual Effects Oscar and a Special Achievement Award at the 1989 Oscars.

Throughout his professional career, Williams and a core team of artists worked on a legendarily ambitious project, what was to be not only Williams' masterpiece note In the traditional sense, ie "The piece you create once you've mastered your medium." but a grand artistic display of the potential of classical animation, what Williams described simply as "the greatest animated film ever made": The Thief and the Cobbler. Williams' studio funneled profits of its many projects to fund bits of the feature, which were all heavily re-re-re-animated over the better part of nearly thirty years from the 60s to the late 80s to ensure their perfection. Tragically, through a combination of time and money problems, the film was never completed as Williams had intended. After receiving funding from Warner Bros. after the success of Roger Rabbit but falling short of their enforced deadline (something Williams had had the luxury of ignoring while working on the film independently), he and his studio were fired from production and the film was hastily completed without them. All of the animation completed by Williams' studio was later compiled by Garrett Gilchrist and released onto the internet as The Recobbled Cut in 2015, awing future generations of animators with a glimpse of Williams' ultimate vision.

After the failure of Thief, Williams' studio closed down and he semi-retired for animation production, largely busying himself with teaching through his acclaimed masterclasses at various animation studios and events. In 2008, he became "artist in residence" at Aardman Animations, where he worked on personal projectsnote sitting at his prize possession: one of the last remaining animation desks Walt Disney purchased for his fledgling studio in 1938 and became a fixture who shared ideas and gave tips to younger animators and entertained staff and visitors with a bottomless well of stories from his life and career.

Outside of the films he's created, Willaims' greatest claim to fame is his instructional book "The Animator's Survival Kit," a culmination of the countless tips and tricks he had learned from his experiences and studying under many Golden Age animators of note. Since its publication in 2002, it has become widely used as a reliable reference for both animation schools and animators all skill levels. A 16 DVD set version, featuring clips from his live classes, and a more condensed and affordable iPad app version of the book have both since been released.

In 1999, Williams secretly began work on a new masterpiece project, sardonically titled I Hope I Live To Finish This, a planned series of shorts animated entirely by himself to eventually be linked together into a feature. The first part, Prologue, premiered at Annecy in 2015. That same year, he joined Twitter

Williams continued to write and draw literally up until the day he died, succumbing to kidney cancer at his home in Bristol on the night of August 16, 2019, at the age of 86. He was survived by his fourth wife, Imogen Sutton, who also produced several of his projects, and six children, including his son Alex, who is also an animator, and his daughter Holly Williams-Brock, a painter.

No relation to Robin Williams, by the way, although he did present Richard with his Special Achievement Oscar for ''Roger Rabbit''

. Also not to be confused with Richard Williams, the father of tennis superstars Venus and Serena Williams.

Films he has been involved with include:

Richard Williams and his works provide examples of: