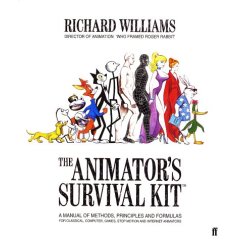 "I want this book to put over what I have found to be the best working methods, so that animating becomes better and easier to do. There are lots of formulas, principles, cliches and devices here to help, but the main thing I want to pass on is a way of thinking about animation in order to free the mind to do the best work possible. I learned it from the best in the business and I've boiled it all down into a systematic working order. It transformed my work - I hope it will be useful to you."
— Richard Williams, in the introduction.
Advertisement:

The Animator's Survival Kit is a critically acclaimed animation book and DVD set made by master animator Richard Williams, the animation director of Who Framed Roger Rabbit and the creator of The Thief and the Cobbler. The book is a culmination of more than 30 years of research and experience, full of invaluable technical information on animation, not so much about how to draw it as to how to move the stuff. As such, the book has recieved excellent praise from those in the industry.

An Expanded Edition of the book was released in 2009, and it also exists as an expensive live class, as a 16-DVD set selling for US$1,000, and an iPad app that basically condenses both for a much more affordable price of $35.