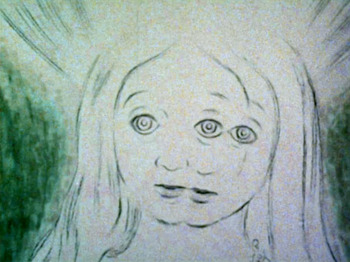 The Ghost of Christmas Past, as brought to you by Richard Williams.
Advertisement:

A Christmas Carol is a 1971 film adaptation of the novel of the same name. It is a half-hour animated film directed by Richard Williams (with Chuck Jones as executive producer, and Grim Natwick as an uncredited animator). Originally broadcast by ABC television, it subsequently had a brief theatrical run, allowing it to win the Academy Award for Best Animated Short Film.

London, 1843: On Christmas Eve, Ebeneezer Scrooge, a notorious miser and curmudgeon, is visited by the ghost of his old business partner, Jacob Marley. Marley warns Scrooge that he must change his ways to avoid a terrible fate in the hereafter, and tells him of the coming of three spirits: the Ghosts of Christmas Past, Christmas Present, and Christmas Yet to Come. These spirits will teach Scrooge how to keep Christmas.

Michael Redgrave narrates the story, while Alastair Sim and Michael Hordern provide the voices of Scrooge and Marley, reprising their roles from the 1951 live-action feature Scrooge.

A Christmas Carol provides examples of the following tropes: