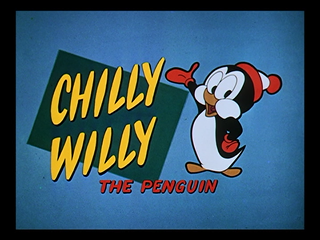 Chilly Willy is a cartoon character created by the Walter Lantz Studio. He is a penguin whose original motivation consisted of a desire to find warmth, unable to stand the cold. He had a precursor in Pablo, the Cold-Blooded Penguin, a character with identical motivation. Pablo starred in a segment of The Three Caballeros (1944) but was a one-shot character. Animation buffs Giannalberto Bendazzi and Don Markstein dismissed Chilly as a mere Clone of Pablo, but it is unclear whether Lantz was familiar with the earlier character. The idea of a penguin protagonist was reportedly suggested to him by mystery writer Stuart Palmer (1905-1968).

Chilly debuted in the animated short Chilly Willy (1953), directed by Paul J. Smith. In said cartoon, Chilly tries to sneak onboard a polar schooner to get access to its stove. The ship's mascot, a Saint Bernard dog, has been specifically instructed to let nobody aboard. Their conflicting interests result in some comedic episodes until Chilly gets the dog drunk. The short ends with the former mascot thrown into the brig and Chilly assigned as his replacement. While adequately funny, the short was not particularly successful.

The following year, Lantz assigned another director to the character: Tex Avery, who was asked to make the character work. Avery felt that the problem was Chilly being overly cute; a "little fuzzy wuzzy penguin" was not inherently funny. He resolved to have Chilly's opponents being the funny ones. Avery directed only two Chilly shorts: I'm Cold (1954) and The Legend of Rockabye Point (1955). The former had Chilly attempting to steal a fur coat from an Alaska fur factory. He has to face the watchdog, Smedley, in his first appearance. Smedley has a Southern drawl, and a deadpan style of delivering lines. The latter short had Chilly and a polar bear compete in stealing fish from aboard a fishing ship. The bear constantly has to face the teeth of an aggressive bulldog who falls asleep whenever he hears lullabies. Both shorts were considerably funnier than their predecessor.

Rockabye Point was the most successful film of the series, because the script-writer was veteran Looney Tunes storyman Michael Maltese. It was nominated for an Academy Award for Animated Short Film, though it lost to Speedy Gonzales (1955), a Merrie Melodies entry starring Speedy Gonzales and Sylvester the Cat. Lantz had reasons to continue the series. Avery was replaced by Alex Lovy, who continued the series in an Avery-like format for most of the 1950s. When Lovy left the Lantz studio, Chilly was handled by other directors, such as Jack Hannah and Sid Marcus, before eventually coming full circle and having Paul J. Smith take over as the sole director in 1967. The series ended with its 50th cartoon short in 1972, but only because the studio itself shut down its operations.

Chilly was revived in episodes of The New Woody Woodpecker Show (1999-2002) but did not return to prominence. The character was an also-ran in the comic book medium. He headlined nine issues from Dell Comics between 1956 and 1962, otherwise only receiving stories in the back pages of magazines featuring Woody Woodpecker as their main star.

Not to be confused with Chill Wills.