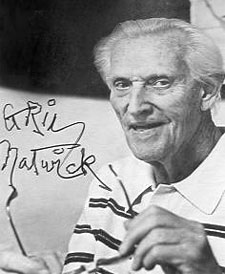 One of the most influential animators in history, Grim Natwick, born Myron Noidveig on August 16, 1890, had a decades long career that spanned the entire history of both The Golden Age of Animation and The Dark Age of Animation, having worked at most of the major cartoon studios of the time.

Noteworthy work of Natwick includes the earliest incarnations of Betty Boop (up till Bimbo's Initiation) and Fleischer talkies in general, contributing heavily to the Ub Iwerks studio, animating a third of Snow White herself in Disney's feature length film, being a top animator at Walter Lantz's studio and UPA, and later down the road served as a mentor and animator for Richard Williams, as well as contributing animation to Richard's animated epic The Thief and the Cobbler, animating the Witch in that film while in his 90's.

You can find the whole story of this underrated animation master in this Animation Resources article.

Works of his include: