The Twelve Principles of Animation 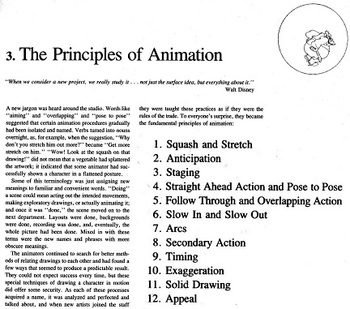 The original list, taken from The Illusion of Life: Disney Animation.
Advertisement:

The Twelve Principles Of Animation is a list of animation principles that came about during The Golden Age of Animation, being discovered and refined by the many studios of the time. Walt Disney, Looney Tunes, MGM and Fleischer Studios make the most notable usage of these principles.

The principles in question are:

All principles except 3 and 9-12 also pertain to the Disney School of Acting and Mime.

Trope Namer is the Frank Thomas and Ollie Johnston book The Illusion of Life: Disney Animation, where the third chapter, the most famous part of the book, covers these principles. Canadian animator Norman Mc Laren also suggested his own variation of the basic animation principles; In his five part "Animated Motion" documentary, he says the three parts of animation fall under; "Motion", "Tempo"note which he claims modulates animation, and he splits this part into five sub-categories; Constant (Or "Even") Motion, Accelerating Motion, Decelerating Motion, Zero Motion (which an animator would usually call a still "Hold" of a drawing) and Irregular Motion). and "Change".

It should be noted that while Frank and Ollie's list covers a fairly good amount of the animation process, other Disney veterans like the late Walt Stanchfield suggested that there are actually a whopping 28 principles of animation, which are discussed in the two volumes of "Drawn to Life", which compile the thousands of notes taken during his acclaimed masterclasses. These principles are listed below: