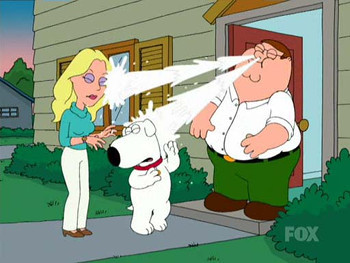 "Needless to say I had to mop up the milk I had been drinking, 'cause it was on the other side of the room! Which is pretty good distance through your nose!"
— Jeff Foxworthy, The Blue Collar Comedy Tour
Advertisement:

Your nose and mouth are linked, in fact they're even linked (via your sinuses) to your eyes. So when Bob is taking a big swig of his nice nutritional milk and Alice makes Bob laugh there are only a few places that milk can go. You either choke, spit it out or, through the magic of pressure, force the milk out of your nose. None of these are a good look (and are in fact rather painful if you've ever actually had it happen to you), but if you can manage to get it out your eyes then you may get on TV so it's not all bad.

Usually a comedy trope. More common with younger children because, well they're generally happy anyway, and not restricted to milk; fizzy drinks, coffee, tea....vomit all can be yours to smell for the rest of the day.

Compare Spit Take, where it comes out your mouth instead and usually is caused by surprise rather than laughter, and Vomit Indiscretion Shot, where in cases of particularly explosive or voluminous vomiting, the liquid is also shot out through the nose.

Tip #3: Don't drink anything during the funny bits (which obviously make up a large chunk of the movie and can pop up at any time), or else the contents will spray from your nose.

Tip #3: Don't drink anything during the funny bits (which obviously make up a large chunk of the movie and can pop up at any time), or else the contents will spray from your nose.