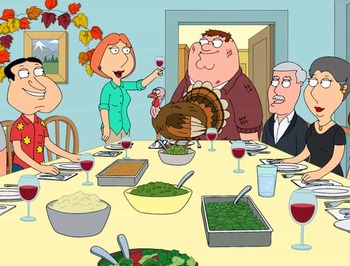 A toast to the turkey. Gobbledygook.
Advertisement:

Turkey is the most common meal eaten at Thanksgiving in the United States. Sometimes, this is taken a step further by having turkeys represent or symbolize Thanksgiving as a whole. The turkey in question (which can be either domesticated or wild) is almost Always Male, most likely because real-life male turkeys are both larger and more colorful than the females. As such, Tom is a common name for said turkeys.

Sub-Trope of Holiday Personification. Expect one or more of these turkeys to appear in a Thanksgiving Episode. Can also involve Let's Meet the Meat if the turkey does or does not want be eaten.

In the UK and Australia, Thanksgiving is not widely celebrated, and turkey is generally associated with Christmas. In Britain there is an increasingly minor religious holiday called Harvest Sunday, which celebrates the bounty given by God for men to reap in Autumn, which has become less and less significant as Britain moved away from being an agricultural economy. Its significance here is that when emigrants took the Harvest Sunday celebration to the USA and Canada, it became Thanksgiving, albeit celebrated on different dates. The Pilgrims were actually celebrating Harvest Thanksgiving in 1621 as they would have done in England, for the same reasons. But they had access to turkeys.