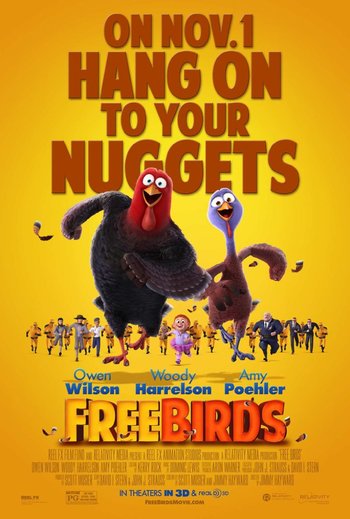 Free Birds is the first animated film from Reel FX Animation Studios. It was produced by Aron Warner (Shrek) and directed by Jimmy Hayward (Horton Hears a Who! (2008))

Reggie (voiced by Owen Wilson) is a turkey on a turkey farm, and seems to be the only one who realizes the fate that's in store for him and all the others there. Fate intervenes one day as the President of the United States comes to his farm to pardon the Thanksgiving turkey, him! Now he gets to enjoy the good life, all the food he can eat, his own robe and slippers, and being able to live without fear.

Reggie's easy life is soon disrupted by Jake (Woody Harrelson), a fanatic turkey who drags him along with an insane idea: go back in time to make sure turkeys are not part of the first Thanksgiving. Through foolhardiness and luck, the pair manage to take an experimental time machine to do just that.

Now in 1621 at the Plymouth colony, Reggie and Jake find themselves in the middle of a turkey clan’s struggle for survival. Along the way, Reggie finds himself falling for the turkey chief's daughter Jenny (Amy Poehler). During their mission, Reggie and Jake's preconceptions of the world and themselves are challenged forever in a conflict from which the world will never be the same.

It was released on November 1, 2013, just in time for Thanksgiving.