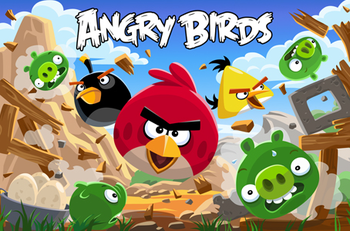 Angry Birds is an artillery simulator/Puzzle Game created by Finnish video game developer Rovio Entertainmentnote Originally known as Relude from 2003 to 2005 and Rovio Mobile from 2005 to 2011 in 2009. The premise of the game is that evil, egg-munching pigs have raided the nests of birds who will get their eggs back, whatever it takes. Said egg retrieving involves launching the birds from a slingshot at the pigs, who are protected behind elaborate obstacles of wood, ice and stone. It's a simple concept, but the execution is often anything but easy. The first game was released on December 11, 2009.

There are several different types of birds, most of which have a special ability activated by tapping the screen in mid-flight:

The Puzzle Game aspect (and the game's main source of difficulty) revolves around the best use of the available birds in each level to collapse the obstacles onto the pigs, as all the pigs have to be taken out to win a level. One to three stars are awarded when you clear a level, with a minimum score needing to be reached to earn all three. Scoring per level is based on pigs killednote 5000 points per pig, damage done to the obstacles, and the number of birds left over at the end of the levelnote 10000 points per bird. Achievements can also be earned for finishing episodes, three-starring all levels in an episode, scoring a certain number of points in an episode, and other things. Each episode also includes a number of hidden Golden Eggs which, when found, open bonus levels.

The games in the series so far:

Originally released for smartphonesnote iOS, Android, Symbian, WebOS, Windows Phone, the game is now available for play on tablet computers, e-readers, the Google Chrome web browser, as a PlayStation Minis app note playable on the PlayStation Portable and PlayStation 3, and on Facebook. Wii, Xbox 360, and Nintendo 3DS have collections released for them on disc/cartridge. As of November 2011, Angry Birds, in all its incarnations, across all platforms, has been downloaded 500 million

times. The only game with distribution figures that come close to this mark is Tetrisnote 35mil via Game Boy; 100mil via phone. However, this is for copies sold, and only on those two platforms; there are no figures for PC, nor for pirated or shareware versions. It's even been parodied

on an Israeli sketch comedy show, which used the endless conflict between the birds and the pigs as a metaphor for the Arab–Israeli Conflict.

for there to be a feature-length Angry Birds film titled simply enough, The Angry Birds Movie. The film was released in May of 2016 and has the voice-acting likes of Jason Sudeikis, Josh Gad, Peter Dinklage, Keegan-Michael Key of Key & Peele, and Smosh. Despite mixed reviews, the film was successful enough to get a sequel, which was released in August of 2019.

For a list of other Angry Birds-related media, see the franchise page.