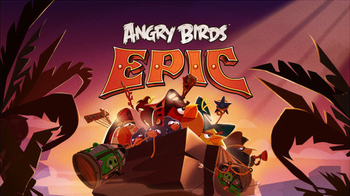 "It all started a long time ago, in a world that was completely made-up: A fantasy Piggy Island, with silly costumes were fashionable and weapons were... How to put it, a bit different..."
— The gameplay trailer

Angry Birds Epic is a Turn-Based Tactics RPG take on Angry Birds. It was soft-launched in Canada, Australia and New Zealand on March 17, 2014, and was released internationally on June 12, 2014.

As usual, King Pig orders his minion pigs to steal the birds' eggs. But this time, with the help of Wizpig (Chef Pig's alter-ego) & Prince Porky (Freckled Pig's alter-ego), they're taking them to various locations across Piggy Island, which leaves the birds in hot pursuit and battling pigs with all kinds of special abilities along the way.