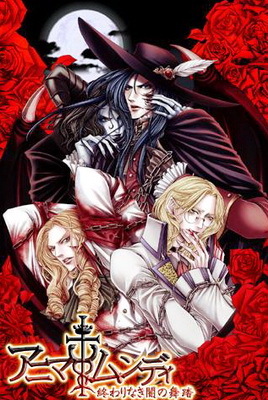 "Georik Zaberisk hasn't been having a good week. His sister is a talking head, his new boss is a sociopath, and he's constantly being pestered by the minions of hell and / or skeezy debt collectors."
— Old Hirameki's BBS, now found in this fansite

A Japanese gothic horror Visual Novel developed by Karin Entertainment and distributed by the now-defunct Hirameki International in the United States. Animamundi Dark Alchemist has the distinction of being one of the few Boys' Love video games brought from Japan to the United States.

The main storyline centers on Georik Zaberisk, a nobleman fallen on hard times. After the mysterious deaths of both his parents, he gave up his position as the Royal Doctor and moved his fragile sister, Lillith Zaberisk, to his family's country manor. There, Georick applied his skills as the town doctor. However, his life has been far from peaceful, for his dreams have recently been plagued by the devil Mephistopheles eager to acquire his soul.

When a mysterious invitation comes from the King of Hardland requesting his return to practice, Georik, bored with his country life, jumps at the chance. However, while away reuniting with his old friends, Lillith is accused of witchcraft and beheaded. Arriving moments too late, Georik retrieves his sister's head only to discover that it is miraculously still alive. Vowing to restore her somehow, Georik returns to the capitol city with the hope that his old occupation will provide him with the money and means to save her.

Help comes in the form of Timothy, a mysterious lad with some knowledge of the forbidden art of alchemy. Uncovering his father's secret lab in the basement of the family mansion, Georik must work against time to create an artificial replacement for Lillith's body. But with a sociopath as his new employer, war on the horizon, shady debt collectors on his heels and a devil haunting his dreams, Georik will need both wisdom and endurance to save his sister's life... and his own soul.