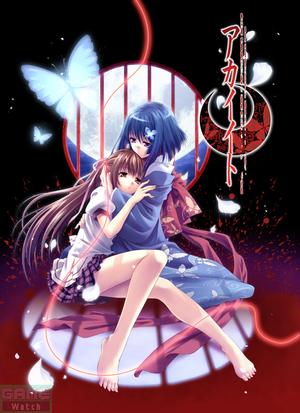 Yumei and Kei cuddling.
"Someone important to me has disappeared.".
Advertisement:

Akai Ito (アカイイト), known in English as Red Strings (referencing the legendary strings of fate) is a visual novel created in 2004 by Success and is essentially a supernatural horror adventure with some Girls' Love and mystery elements thrown in.

The story is about a girl named Hatou Kei who, as a result of a dead mother, heads to her father's house in order to claim her inheritance. However, she soon finds herself caught up in supernatural happenings after a dream concerning a huge tree and a mysterious girl, Yumei. She meets several other characters, including Uzuki Senba, an Oni slayer; Tzuzura Wakasugi, a girl accompanied by a white fox; Sakuya Asama, a friend of Kei's mother; and KEI-kun, a strange boy who happens to share Kei's name.

Though things start out peaceful, they quickly go to hell with the appearance of Nushi-sama, an evil snake god from long ago, and his twin Oni followers, Nozomi and Mikage, who are fully intent on consuming Kei's blood. Kei and her new allies must protect her from the threat, and learn of the supernatural secret contained in her blood...

Besides its haunting and melancholic atmosphere, the visual novel is well-known for its difficulty (as is its sister-game, Aoishiro) with dozens of bad endings one can get.

It has an in-direct sequel of sorts called Aoi Shiro. While not following the same story, or having the same characters, it takes place in the same universe and many elements from Akai Ito, both story and 'gameplay', return. Sakuya gets a cameo in the Updated Re-release PC version of the game.

You can now buy it on PSN for the PlayStation 3. Has slightly improved resolution, and Dual Shock 3 support.