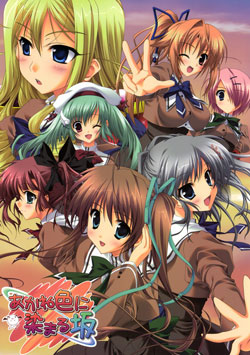 Akane-iro ni Somaru Saka ("The Hill Dyed Rose Madder") is a 2007 Visual Novel by feng. A 12-Episode Anime adaptation also aired as part of the Fall 2008 lineup, as well as a 2-volume manga adaptation running 2008-2009. A PlayStation 2 port with a new voice cast (based on the anime) and a more family-friendly version, Akane-iro ni Somaru Saka Parallel, was released about a year later, which was eventually ported to the PlayStation Portable on 2009.

Junichi Nagase is known around town as the feared "Geno Killer". One day while out for a walk, he saves a girl from some delinquents trying to cause trouble. That girl was Yuuhi Katagiri. In a fit of impulse, Junichi ends up kissing her, only to find out that because his parents saved her father some time ago, she is now engaged to be his fiancee. Yuuhi then starts living in his house to try and assemble a report on Junichi to prove to her father why they shouldn't be married. The rest of Junichi's class goes to great lengths to tease the couple, so as it goes, Hilarity Ensues.