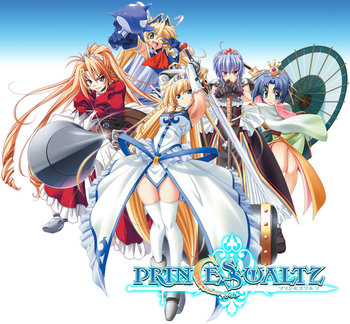 Princess Waltz is a Visual Novel by Pulltop, notable in its time for being easily the most graphically intensive and text heavy example of the genre then published in the West. Localized by publisher Peach Princess, a subdivision of JAST.

It is a tale of a land called Eldhiland, where for years the six princesses of the land have competed in the titular tournament in order to win the hand of the Prince of the Imperial Family. Now it is time for the ladies to compete for the hand of Prince Chris, these six beautiful girls showing off their graceful dancing skills as they discover the values of friendship, love and embroidery...

Oh, it's not that kind of story? Ok, strike that, it seems the Princess Waltz is less about dancing, and more about said six princesses beating the unholy crap out of each other with a selection of improbably huge and unconventional weapons. With Eldhiland choosing to hold the tournament on present day Earth, main character and good natured jock Arata is drawn into events when he accidentally befriends the local Enigmatic Transfer Student and discovers that said transfer student is the much coveted Prince Chris himself. For unknown reasons Chris has joined the Waltz in disguise as the mysterious Princess Iris, and after much Ho Yay, Arata decides to aid him in his battle to beat the other five and win the tournament himself.

Not getting by simply on the strength of its high production values (Even the minor characters get unique paperdolls.) Princess Waltz combines its characters with a tone that shifts seamlessly between comedy and drama with equal attention and skill paid to both. The plot isn't anything new but it's well told, and even if it occasionally veers towards thin excuses for everyone to punch each other the fights are so damn good it doesn't matter. So good indeed that at times you ache for them to be animated, excellent sound effects and clever use of paper dolls combining with strong writing to produce some truly badass stuff.

Not to be confused with Princess Evangile.