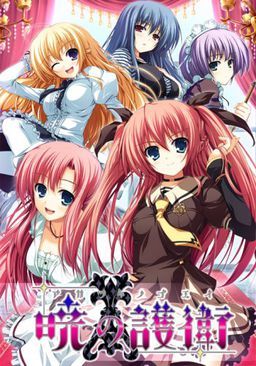 Akatsuki no Goei is a 2008 Visual Novel developed by Syangrila, later renamed Tigre Soft. It has one fandisc, one sequel and a distant future spinoff of sorts known as Reminiscence.

Renou Academy is a high class institute for wealthy girls and the boys who will eventually be their bodyguards. Asagiri Kaito is near the bottom of the bodyguard class and plans to drop out to return to his home. Unlike the other students, Kaito is doing as poorly as he can without failing because he is not actually interested in becoming a bodyguard, but an old acquaintance of his father searched for him in the hellhole slums and convinced him to attend, promising that he would get answers about his father. After a year, Kaito submits his withdrawal notice, which is rejected after he saves the richest girl in school on a whim and she blackmails him into becoming her bodyguard as thanks. A real charmer.

Unable to leave school, he contents himself by embarking on a new mission to annoy absolutely everyone to the best of his ability and, like his nearly supernatural physical skills, he has great ability when it comes to harassment. You see, Kaito only has two real hobbies. One, he reads everything. Two, he pushes his luck as far as he can to dare people to punish him as a way of relieving the monotonous lifestyle he has to lead now. At least his new principle won't be too boring.