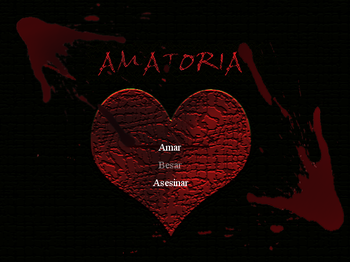 Love. Kiss. Kill
Amatoria is an adult RPG Maker game with a heavy emphasis on blood and gore. It was released by Adrian Zamora (under the name Lightin Dark Games) during the Valentine's Day in 2008.
Advertisement:

Valentine's Day is coming and Luisa isn't too happy about it. Until she receives a phone call from her best friend, Beatriz. She has set up a date for her and her brother Hector in the Amatoria motel. Luisa is excited about spending the night with the boy she loves....only to find out Hector is gone and someone locked her up in the motel. Who locked her up? Where is Hector? What's going on?

The games were released in Spanish and Italian, but the links have been lost to time. However, there are still gameplays about them on Youtube.