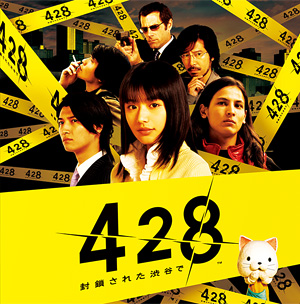 428: Shibuya Scramble ("428: Fuusasareta Shibuya de", lit. "428: Blockaded In Shibuya") is a 2008 Visual Novel for the Wii, published by Chunsoft. It is one of the few games (and the only visual novel) awarded a perfect 40/40 score from Famitsu, and was later ported to the Playstation Portable, Playstation 3 and mobile devices. It is released internationally as 428: Shibuya Scramble on Steam and Playstation 4 on September 4, 2018 in the US and September 21, 2018 in Europe. The game serves as a Spiritual Sequel to Machi, which was released in 1998.

In the Shibuya district of Tokyo, Japan, a young woman named Maria Osawa is kidnapped and held to ransom by a criminal organization. Hitomi, the sister of the victim, is ordered by the criminals to deliver the ransom money to a contact at the famous Hachikō statue outside of Shibuya Station. However, the exchange takes an unexpected turn when the kidnappers suddenly order Hitomi to "find a blue van" before fleeing with the money, and a mysterious man attempts to murder her.

Over the next ten hours, events quickly spiral out of control, and it becomes apparent there is something far more complicated and dangerous about this kidnapping than first appeared...

Unlike most visual novels, there are five protagonists whose individual stories play out over the course of the game:

Using a timeline chart, players must navigate all five stories simultaneously in order to progress towards the ending, with decisions in one story directly affecting another. For example, if Achi chooses to immediately approach the ransom exchange in his route then he is wrongfully arrested by Shinya; this in turn causes Shinya's route to stall because he arrests the wrong person. In another instance, choosing to give accurate directions to a pair of yakuza members will cause them to show up at an inappropriate time in another character's route, making it impossible for the latter to proceed.

A bonus scenario for this game dealing with Maria friend's past was created by Kinoko Nasu and Takashi Takeuchi of Type-Moon fame. This scenario eventually got its own spinoff anime called Canaan (which, to give fair warning, does spoil a few plot twists of the game).

As the game has been out in Japan since 2008 and the game has only been released worldwide in 2018, late arrival spoilers apply to the tropes below. You have been warned.