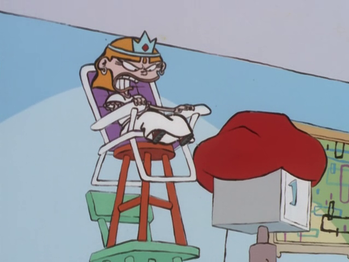 She's small. Short. Petite. Vertically challenged. Yet, she acts like the worst of dictators.

She tells everyone what to do, and expects them to obey. Threats ensue if people don't. Sometimes even physical violence. Maybe she's Compensating for Something?

Perhaps it's the incongruity of a small young girl ordering people around as if she were the big alpha male, but it's a pretty common character design. Some people think she's cute. Others think she's annoying. Either way, this is a visually and verbally striking character and is rarely forgotten. Making large men the target of her orders just adds to the fun.

Often justified by having her be a spoiled rich kid or even royalty. Other times, she's just the only daughter in a family full of males, and her older brothers spoil her immensely. At others, she's a mostly normal girl but either has a serious lack of social skills or is scared of being steamrolled by taller/older/etc. people, so she covers up her insecurities with aggressive behavior. She's usually pre-puberty age, but sometimes it can creep up into the teen years. There's a good chance when someome acts bossy and aggresive to them, she'll hate being so without as hint of irony. It's possible for her to have character development and learn either humility or wisdom, but other times she'll never learn.

Certainly some Truth in Television, as plenty of parents and grandparents can confess to being amused by their daughter ordering them about in a very decisive manner.

Compare The Napoleon and Bratty Half-Pint. A gender-bent version could also be Tiny Schoolboy, but there are nicer forms of the character as well. The Shana Clone archetype is a notable subtrope.