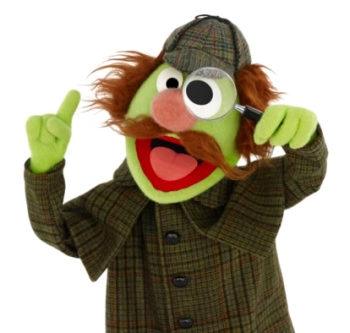 For over a century, Sherlock Holmes has been one of the icons of English-language mystery fiction, and the character's popularity has spread around the world and through multiple media. Not surprisingly for such an influential character, Holmes has become a Fountain of Expies. Most post-Holmes Great Detectives have some Holmesian influence, but in the case of the Sherlock Homage this is particularly blatant.

Sherlock Homages are intelligent, cerebral, eccentric characters who solve mysteries and are very good at it. They may be heroes or antiheroes, but are never outright villains. While they often have a keen understanding of human behavior in a Guile Hero sort of way, the typical Sherlock Homage is not a people person - whether due to introversion, Intelligence Equals Isolation, or being a bit of a jerk. Sherlock Homages favor logic over emotion, and if they do have unexpected reserves of feeling they tend not to be gushy about it. They often have other traits inspired by aspects of Sherlock Holmes' character, such as:

In series in which the original Sherlock Holmes stories exist, the Sherlock Homage may be an Ascended Fanboy and fully aware of their similarities. It isn't rare for a character who's not a Sherlock Homage all the time to spontaneously adopt Holmesian traits if the plot ever requires them to solve a mystery. Parodies of this trope, in which a character has the appearance of a Sherlock Homage but the skills of a Clueless Detective, are also common.

Candace and Stacy pretend to be Sherlock Holmes and Watson and use the method of deduction to find out what the boys are making and where.

Candace and Stacy pretend to be Sherlock Holmes and Watson and use the method of deduction to find out what the boys are making and where.