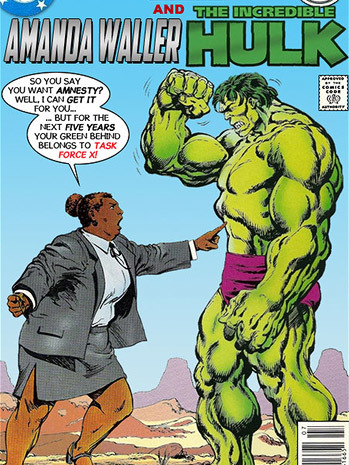 There appears to be a growing trend for making the Da Chief the polar opposite of the old, white man he always was in the past. There's a new boss in town, okay? And the Cowboy Cop, or whatever smart-alec subordinate would need to watch out, because she ain't putting up with any of his crap.

The Black Boss Lady is characterized by being a Twofer Token Minority, both a woman and Black, in charge of probably mostly men in a stereotypically male profession. Right there, you know she's a badass because she must be so good at her job, that even any discrimination which might have been in her way due to either her gender or race was bulldozed flat in two-point-five seconds by her incredible competence.

Because the Black Boss Lady is good, or she wouldn't be where she is today. She's not afraid to take some risk if there is a decent chance of a worthwhile pay off. She presides over her organization with an iron fist, but she's also a Reasonable Authority Figure and will give the Cowboy Cop (or lawyer, or reporter, etc.) credit where it's due. At first she might seem like a hardass by-the-book type but inevitably they get used to each other, she reveals hidden depths, and the two give each other room to work and come to appreciate the other's strength.

When it comes to drama, her blackness is hardly ever mentioned, her femaleness being the main source of plot. This being so she won't have much of an Urban Accent or have many tropes stereotypically associated with blackness. She almost never slips into Sassy Black Woman, for instance. She's also usually very well-dressed, in a business skirt-suit or slacks (nothing even remotely risque), and it's not uncommon for her clothes to be somewhat masculine. Often she has managed to have her cake and eat it too (mostly) in that she has both a shining career and a family.

One could reasonably consider the Black Boss Lady to be the Distaff Counterpart to the Bald Black Leader Guy, though the main things they have in common are being black and being leaders (though there's technically nothing in the trope that excludes her from being bald too). Is also a subtrope of Da Chief, most of the time, though this trope isn't restricted to situations where she actually is Da Chief, she just needs to be the boss of whatever organization she's running, e.g. being a Stern Old Judge.