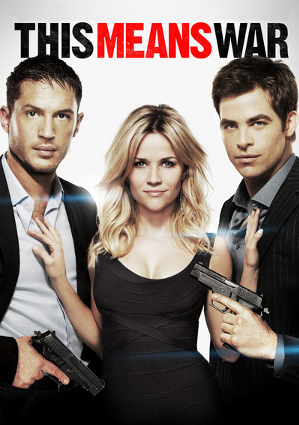 This Means War, starring Chris Pine and Tom Hardy, directed by McG and produced by Will Smith, is a 2012 action Romantic Comedy about two CIA agents who accidentally start dating the same girl.

The two agents, Tuck (Tom Hardy) and FDR (Chris Pine) are scouting out a party for a target. This introduces us to the two main characters and their dynamic, which is a typical but adorable pair of good friends. Tuck is much more polite and sweet while FDR is roguish and impulsive. Their targets are two brothers and when a fiery shootout hits, one of the Heinrich brothers, Jonas, is accidentally killed, causing the other, Karl (Til Schweiger), to swear revenge on the two friends.

Meanwhile, a lonely woman named Lauren (Reese Witherspoon) has gotten tired of the single life and her best friend Trish (Chelsea Handler), makes her a profile on a dating site. Similarly, Tuck has had little luck in love as he is divorced and has a child to take care of and so he decides to try the same dating site. He and Lauren meet up on a blind date and hit it off while FDR hangs out in a video store nearby just in case the date goes south and Tuck needs an escape. However, Lauren goes to the video store and FDR, clueless that it’s the same girl Tuck had just gone out with, becomes interested in her as well. Tuck and FDR meet up later at their office only to discover they are dating the same girl. Both men offer to break it off with her because they are friends and do not want to lose their friendship over a girl, but their pride gets the better of them and it becomes a competition to see whom Lauren chooses. As their tempers flare, their friendship starts to fall apart as they get more and more aggressive about trying to get Lauren to fall in love with one of them. All the while, the enraged Karl is closing in and looking for a way to hurt the boys for the death of his brother.