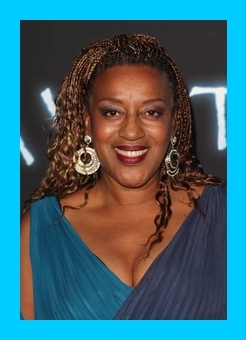 Applause is the most powerful thing... people talk about the sound of it, but what I hear is glee.
Carol Christine Hilaria Pounder (born December 25, 1952 in Georgetown, Guyana), known professionally as C. C. H. Pounder (styled "CCH Pounder"), is a Guyanese-born American film and television actress.
Advertisement:

Pounder has been working successfully in film, television and theatre for almost three decades, often cast as tough but ultimately good-hearted authority figures. A memorable actress with a distinctive voice, she's perhaps best-known for her role as Claudette Wyms on The Shield and is considered by most to be the definitive Amanda Waller in the DC Animated Universe.

She's also led an interesting life, having been born on Christmas Day 1952 in Guyana and raised on a sugar cane plantation. Her parents moved to the States while she was still a young girl, but she and her sister were sent to a convent boarding school in Britain where they were introduced to art and the classics. Following high school graduation, she arrived in New York and studied at Ithaca College, where her acting talents were discovered. Regional and classical repertory theater followed, earning roles in such productions as "The Mighty Gents" with Morgan Freeman at the New York Shakespeare Festival and "Open Admissions," her Broadway debut. Her preference for a warmer climate led to her move to Hollywood in the late 1970s. Her breakout film was Bagdad Cafe, a quirky comedy set in a remote desert town.