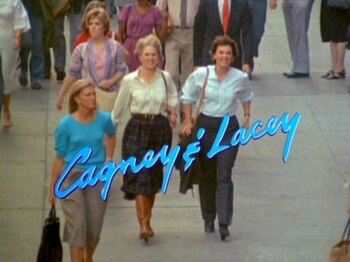 Cagney & Lacey: Two female New York City Cops, Christine Cagney and Mary Beth Lacey, fighting crime together in the Big Apple. It was groundbreaking in its time (The '80s); for that matter, you don't see many series like it today, either.

Debuting with a Pilot Movie on October 8, 1981, it originally only ran for one half-season, but after CBS canned it, a letter-writing campaign brought it back, and it stuck around until May 16, 1988. Four reunion movies were produced through the '90s.

Loretta Swit played Cagney in the pilot; after the producers of M*A*S*H (on which Swit played Maj. Margaret Houlihan) refused to release her from her contract, Meg Foster stepped into the role for the remainder of Season 1. Foster, in turn, was replaced in Season 2 by Sharon Gless. Tyne Daly portrayed Lacey for the entire run.

Was repeated on BBC2 on weekday afternoons. (Oct-Dec 2013, March 2014 onwards) as part of the channel's "Afternoon Classics" strand, and as of 2018 reruns were be found on Channel 5 for British viewers. Terrestrial station This TV (owned by MGM, who inherited it via their purchase of Orion Pictures in 1997) also currently airs three reruns Sundays at 8/7 pm, 9/8 pm, & 10/9 pm Central.