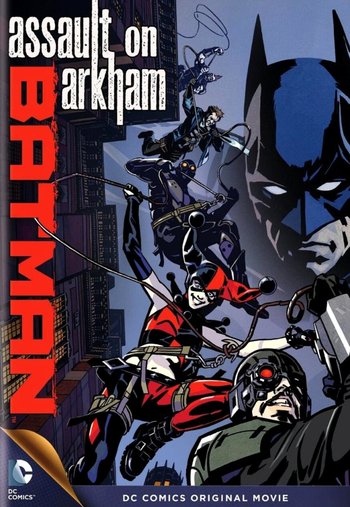 Batman: Assault on Arkham is a 2014 animated film from the DC Universe Animated Original Movies; it is based on the Batman: Arkham Series universe, and takes place within said universe after the events of Batman: Arkham Origins Blackgate.

After The Riddler steals top-secret information from Amanda Waller, she summons Harley Quinn, Deadshot, Killer Frost, Black Spider, King Shark, and Captain Boomerang to form the latest iteration of "Task Force X"—better known as the Suicide Squad. Their mission, whether they want to accept it or not: infiltrate Arkham Asylum and steal back the information from The Riddler. Getting in proves easy for the Squad; when The Joker gets involved and Batman starts investigating, however, getting out alive becomes an altogether different matter.

You can watch a trailer for the film on YouTube.

You can find the character page for this film under Miscellaneous in the Rogue's Gallery.

Following the reveal of Suicide Squad: Kill the Justice League, which reveals complete redesigns/personality overhauls of both King Shark and Captain Boomerang, alongside them still being alive, it's very likely Assault on Arkham falls into Canon Discontinuity.

The name all villains fear.

The name all villains fear.