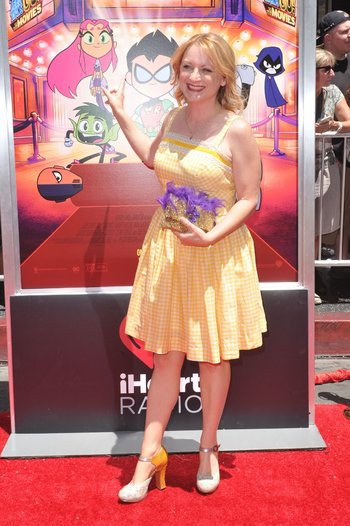 "Don't take my picture!"
— To Starfire, Teen Titans Go!note She legitimately doesn't like having her picture taken in real life unless she absolutely has to.
Advertisement:

Describe Hynden Walch here, friends, or I'll lock you in my dungeon FOREVER!

A voice actor who got her start in ChalkZone and Teen Titans (2003), Heidi Hynden Walch (born February 1, 1971 in Davenport, Iowa) is best known for her moe and overly-cutesy voice roles. (Her type is played with when she voices Starfire on Teen Titans, who is very sweet and naive but is a superhero who can kick ass, and Princess Bubblegum in Adventure Time, who is a genuinely good person but hides a lot of anxiety, cunning, and ruthlessness behind her Princess Classic facade).

Keep in mind that while she does have a fair share of anime roles (i.e. Yutaka Kobayakawa in Lucky Star and Emiri Kimidori in The Melancholy of Haruhi Suzumiya), most of her voice work is predominately in Western Animation and Video Games.