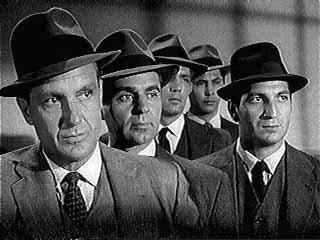 A live-action crime series, produced by Desilu Studios and airing on ABC from 1959–63, based on the exploits of (Real Life) 1920s Chicago Prohibition agent Eliot Ness and his group of loyal agents, nicknamed "The Untouchables" because of their refusal to be bribed or intimidated by the Mob as many others were at the time. Most notable for pursuing bootleggers and gangster Al Capone (and eventually arresting him — on tax evasion charges).

Later adapted as a 1987 feature film, which itself inspired a second television series in 1993, starring Tom Amandes as Ness.